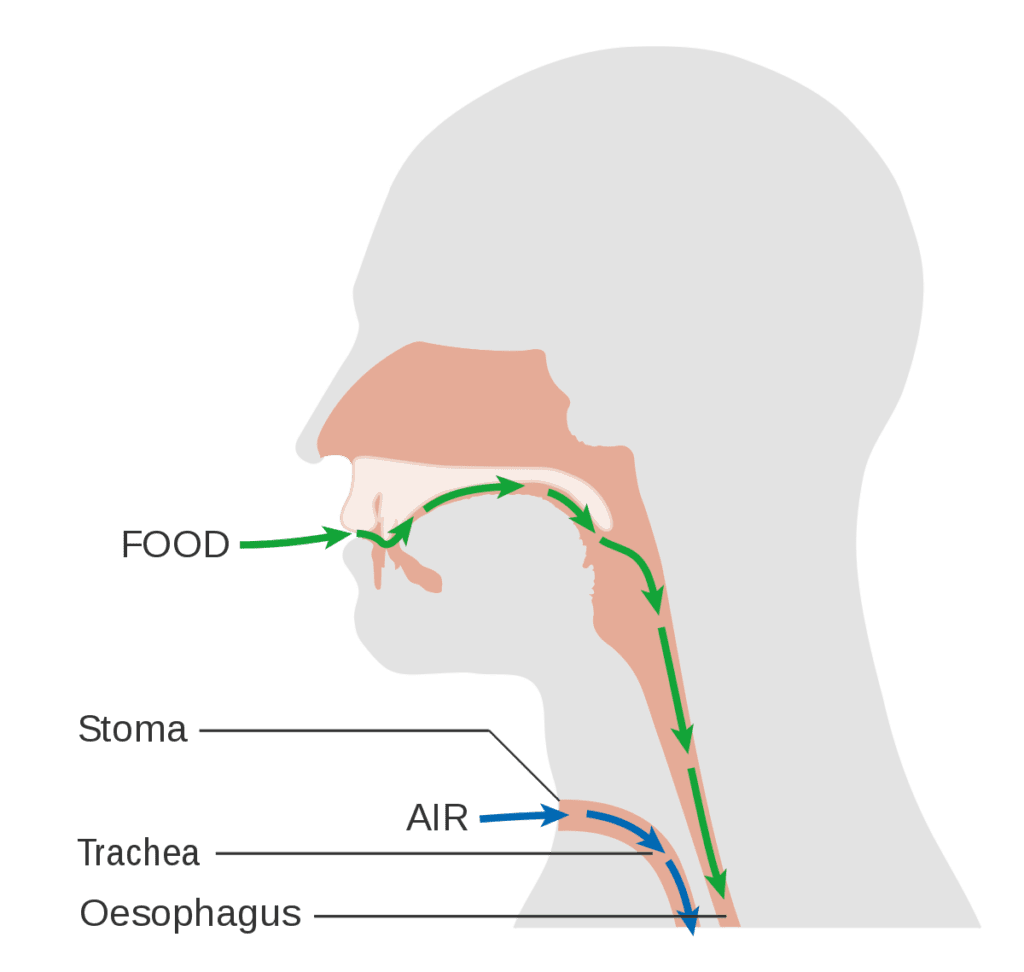 What is a laryngectomy?

Laryngectomy is the removal of the larynx (the voice box) from the neck, due to laryngeal cancer or trauma to the larynx from another source. Prior to surgery, the larynx connects the mouth and nose with the lungs and houses the vocal folds used for speech. During a complete laryngectomy, the larynx is removed and the airway is re-directed from the lungs to a hole in the neck called a stoma. Following the surgery, the person must use a new way to breathe and a new source of sound.

HOW WILL MY LARYNGECTOMY AFFECT MY BODY?

Many things change following a laryngectomy. Swallowing difficulties will be present at first due to swelling caused by surgery, therefore a feeding tube will be inserted until the patient recovers and swelling is reduced. The senses of smell and taste change so eating is affected in this way as well. Air now enters the lungs through the stoma, so the nose no longer purifies, warms, or cleans the air going into the lungs. This results in excess mucous production, which becomes less as the body adjusts to the change. In addition, defecation abilities may be altered because the ability to build up pressure below the vocal folds is lacking. The most profound change for most following a laryngectomy is the inability to voice speech to communicate.

WILL I EVER BE ABLE TO SPEAK AGAIN?

There are 3 possibilities for voice restoration following a laryngectomy. Each possibility has positives and negatives. The first and easiest to use is an artificial larynx (AL). The AL is an electronic device held with one hand and is placed directly on the neck or a tube is placed in the mouth. The person pushes a button and articulates speech as before surgery. It is the easiest and quickest to learn and is most often used directly following surgery. The drawback is that it has a robotic sound and runs on battery. The second possibility is the use of esophageal speech. Esophogeal speech is trapping environmental air in the mouth, pushing air into throat, then releasing the air back out of the mouth.

The throat/esophagus vibrates, creates sound, and the sound is shaped into words as it was before surgery. Use of esophageal speech frees the person from using anything outside his or her own body to produce sound. The drawback is that this takes 6 months or longer to learn. The last possibility for voice restoration is atracheo-esophogeal puncture (TEP). The TEP is a hole, surgically created, that connects the trachea to the esophagus in which a prosthetic device is inserted to allow air from the lungs to enter the esophagus. To use the TEP for speech, the stoma is covered, air from the lungs is exhaled, part of the esophagus vibrates, and the sound is shaped into words as before surgery. The drawbacks is that the TEP attaches the person to their healthcare worker for prosthetic changes, cleanings, and check-ups.

WHAT IS THE ROLE OF THE SPEECH LANGUAGE PATHOLOGIST?

The Speech Language Pathologist (SLP) plays an important role in the life of the laryngectomy patient and family. Before the surgery, the SLP will meet with the patient and perform evaluations to determine important aspects of his/her communication such as accent or speech variations. This information will help the SLP plan treatment after surgery. In addition, the SLP will explain what the person can expect before and after surgery. He/she will encourage the patient to use a pen and paper to communicate immediately following surgery and will teach the use of the artificial larynx so it may be used as soon as physically possible following surgery.

The goal of the SLP following surgery is to provide the patient with a new source of sound for speech. He/she will establish therapy times and together, with patient, family, and physician, determine the best option for voice restoration for that person. The SLP will provide therapy to teach voicing methods and will provide swallowing therapy as needed.

Laryngectomy is a surgical procedure to preserve life when cancer has been found in the larynx (voice box). With the larynx removed it is necessary to communicate and breathe in a new way. Alaryngeal speech is speech without the voice box. Also, the air from the lungs will no longer move through the mouth and nose. The air must be directed through a new path. A surgical opening called a stoma is created in the neck.

Also called “Burp Speech.” The tongue forces the air in the mouth back into the throat and then a low pitched, burp-speech can be produced. This method of communication does not require the purchase of any special equipment, but can be difficult to learn.
Close

The electrolarynx is device that produces an electromechanical vibration that can be heard as a tone. Transcervical devices are placed against the neck and send the vibration towards the mouth where the tone can be shaped into words by the tongue and lips. Intraoral devices introduce the sound source through a tube directly into the mouth and words are shaped in the same way as with the transcervical devices. This method of speech is easy to learn and results in a loud voice. The initial cost may be expensive, but in the long run this is one of the cheaper methods of communication. The voice produced with this device sounds mechanical and the electrolarynx requires the use of a hand and has a conspicuous appearance.
Close

In order to use TE-Voice, a hole connecting the trachea (windpipe) and esophagus must be surgically created. This hole is called a fistula. A small voice prosthesis is inserted into the fistula which allows air from the lungs to enter the mouth. This air can be used for speech production. However, with the voice box removed, other tissues in the neck must vibrate to produce voice so the voice is lower in pitch. This method of speech requires purchase of replacement prostheses, regular office visits, and daily cleaning of the prosthesis. It may be necessary to use one hand to operate the prosthesis. Hands-free speech is possible with the use of a tracheostoma breathing valve.
Close

MedSpeech, Inc., offers a variety of services for all of your speech-language pathology needs. We specialize in:

We also offer fiberoptic endoscopic evaluation of swallowing (FEES) and videostroboscopy. Call us at (561)-833-2090 or click here to fill out our contact form today!